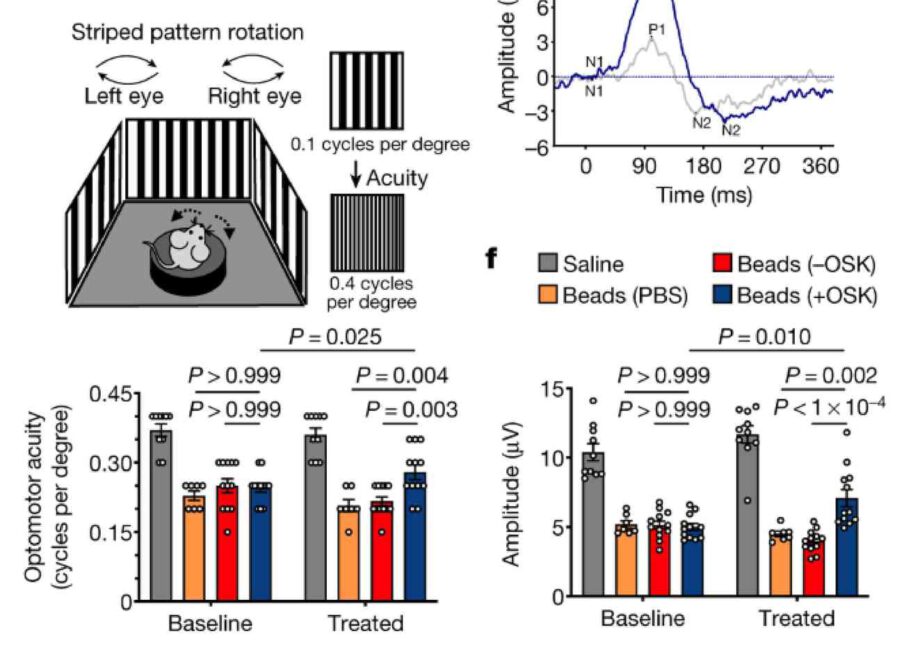 Scientists from Harvard Medical School addressed this question in the visual system. They were able to reverse vision loss stemming from diverse causes, such as optic nerve injury, glaucoma, and the normal aging process. One hallmark of aging is the loss of regenerative abilities, especially in the central nervous system. As a consequence, injuries and cell death cannot be compensated. In their study1 published in Nature last year, Lu et al provided the treated mice with a gene cocktail that turns back the cellular clock, and adult retina cells regained the regenerative capacity of younger cells to reverse the aging process.

The genetic information, in form of DNA, is the same in all cells of the body. Cells gain their genetic identity by methylation of their DNA, which marks some genes as inactive and others as active. This so-called epigenetic gene regulation also occurs in stem cells residing in different tissues, which allow (re-)generation of tissue-specific cells. With age, these stem cells lose their youthful methylation pattern and with that their ability to regenerate new cells. In mammals this occurs first to the central nervous system. Retinal ganglion cells of embryos and newborn mice can be regenerated when damaged, but already a few days after birth this capacity gets lost.

The work of Lu et al builds on the Nobel Prize winning discovery of Shinya Yamanaka. Yamanaka found that four transcription factors, Oct4, Sox2, Klf4, and c-Myc (the “Yamanaka factors”) can erase epigenetics markers on cells and return these cells to their primitive embryonic state from which they can develop into any other type of cell. When applied to living organisms, this is too successful: stem cells are returned to a state too youthful, losing their full identity, and tumors can develop. Lu et alwere successful when supplying only the first three of the Yamanaka factors (a three-gene cocktail referred to as “OSK” based on the first letters of the gene names). This treatment rejuvenated the tissue-specific stem cells while leaving their identity intact.

When introducing OSK to ganglion cells in optic nerve crush injury models, first results were visible already after 12-16 weeks: The regeneration of the ganglion cells began, and they reconnected with the brain via newly sprouting fibers: the damage was repaired. OSK treatment was also successfully applied to mouse glaucoma models, where damaged eyes restore their axon density when treated. Also vision loss due to the normal aging process has been reversed by OSK treatment. The researchers hope that this success in laboratory mice will eventually help us to treat diverse age-related eye diseases in humans.

In this study, the quality of vision was tested in the treated mice by monitoring their optomotor reflex. The optomotor reflex represents the progression of vision loss in many different diseases, and can be quantified easily with our OptoDrum. The applications of the OptoDrum are not limited to inherently visual diseases, but include other rare diseases, neuroinflammation, and aging.