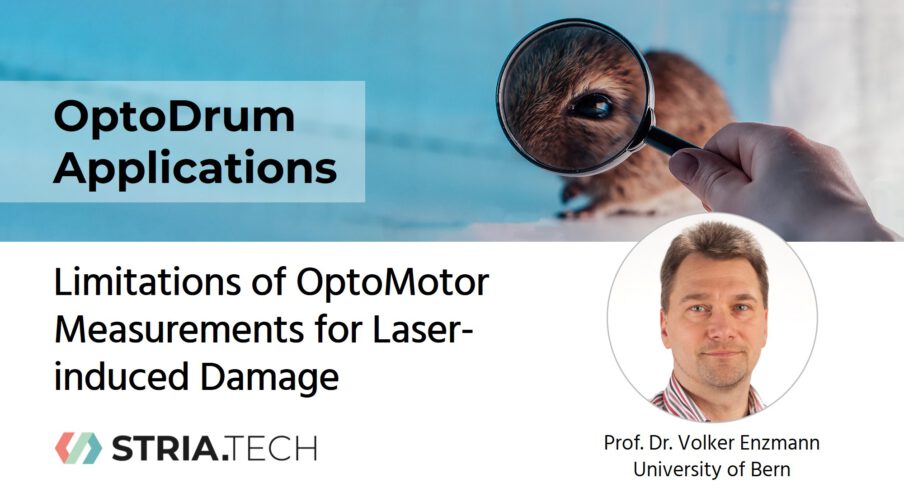 In our video series “OptoDrum Applications” we introduce you to different research applications of Striatech’s OptoDrum. This video focuses on an example that shows the limitations of optomotor measurements. Prof. Dr. Volker Enzmann from the University of Bern illustrates this with the application of laser-induced damage.

Optomotor behavior is the output of a reflex circuit that starts in the retina, and damages in any part of the circuit can affect the behavior. However, the relationship between the type and amount of damage and the behavior is not necessarily linear. For example, local retinal damage may not lead to a change of the behavioral output if significant areas of the tissue are left intact. This can be observed with the model of laser induced retinal damage: local scarring of the retina does not cause a decline of the optomotor reflex. The reason: The remaining part of the retina can drive the optomotor reflex robustly in this case.

In this video of our “OptoDrum Applications” series, Prof. Volker Enzmann shows his data on laser induced damage, and how the optomotor reflex behavior is robustly maintained in treated mice. He points out that for each disease model, the researcher needs to establish the exact relationship between the physical and functional damage on the cellular and tissue level on one hand, and the corresponding effect on the optomotor reflex on the other hand. Laser-induced retinal damage is an example where one might have expected an influence on visual behavior, but where, surprisingly, the optomotor reflex is not affected. On the other hand, it is remarkable that a simple reflex-driven behavior, the optomotor reflex, can provide such a good readout for many diseases, including for non-visual conditions like aging or some rare diseases.

If you have questions or would like to discuss your specific research application, have a closer look at our OptoDrum page or contact us directly via info@stria.tech.